Unveiling of the first joint book by ATU and Copenhagen University 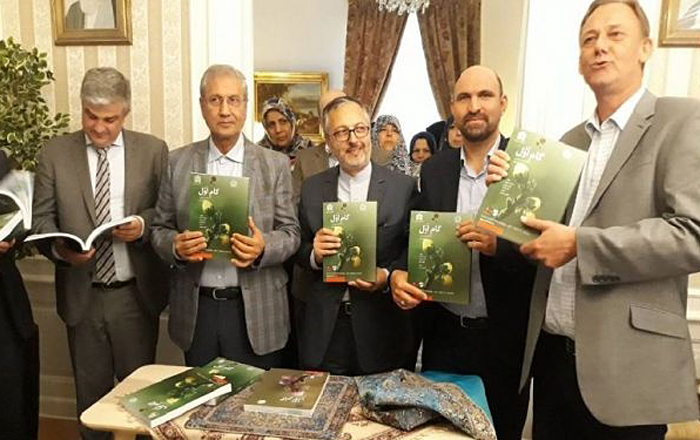 A ceremony was held on 7 May 2018 to unveil a translation of an ATU Press volume by Copenhagen University Press.

A ceremony was held to unveil The First Step, a volume previously published in Persian by ATU Press, translated and published by Copenhagen University Press was held on 7 May 2018, with the participation of Dr Ali Rabiee, the Iranian Minister for Cooperation, Welfare and Social Welfare; Mr Morteza Moradian, IR Iran's Ambassador to Denmark; Dr Patersen, Head of the Department of Iranian Studies in Copenhagen University; and Dr Hosseini Masoum, the Iranian MSRT representative, and other guests from the two countries.

In this ceremony, Dr Rabiee, referring to the double importance of the role of culture in the relations between nations, commended the professors of Persian Language and Iranian Studies at University of Copenhagen for their efforts in this regard, and noted that such works would be very important and effective. Recalling his childhood memories and familiarity with Danish literature through the stories of Hans Christian Andersen, he emphasized the importance of promoting Persian Language and introducing Iranian Literature, and considered the expansion of Iran- Europe relations, especially after the JCPOA, as a good ground for these activities.

The Ambassador of Iran also reported on the growing cultural and economic relations between the two countries, and the extensive presence of Iranian graduates in the highest scientific, academic, economic and managerial levels in Denmark, and anticipated a bright landscape for these relations.

At this ceremony, Dr Klaus Patersen described the First Step as the best volume to date developed in the field of Teaching Persian Language to Non-Persian Speakers and highlighted its high quality as the impetus for his translation of the book into Danish. Finally, he presented a copy of his translation to the Iranian Minister of Labor and the ambassadors of the two countries, and announced that the book is in stock for the enthusiasts.

Dr Hosseini Masoum then thanked Dr Patersen for his work and cooperation, and announced that the book will be used as a textbook for students of the University of Copenhagen from the coming semester.