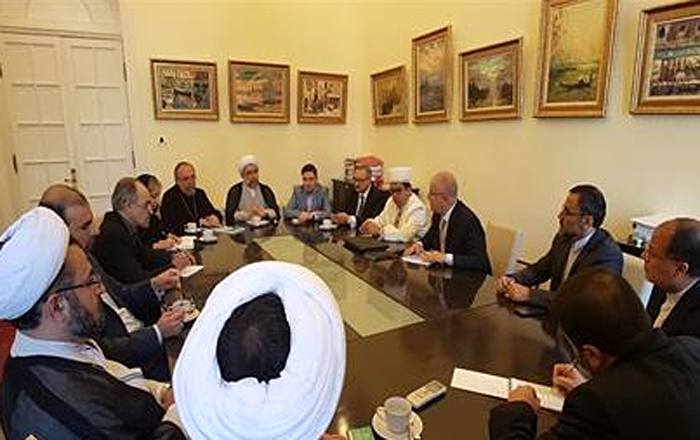 In their travel to Romania, Dr Hadi Ajili and Prof. Aliasghar Mosleh had a meeting with the Vice Minister for Religious Affairs at Romanian Ministry of Culture. ATU, Al-Mustafa and Irans Religious Dialogue Forum formed the Iranian delegation.

Two faculty members of ATU together with officials from Islamic Republic of Iran's Religious Dialogues Forum had a meeting with Vice Minister for Religious Affairs (Ministry of Culture and National Identity) of Romania in Bucharest.

Professor Aliasghar Mosleh, former Dean of the Faculty of Persian Literature and Foreign Language and Faculty Member thereof; and Dr Hadi Ajili, Faculty Member in the Faculty of Law and Political Sciences, travelled to Romania and had a meeting with Victor Opasky, Vice Minister for Religious Affairs, at the Romanian Ministry of Culture and National Identity. During this session, Opasky pointed to the development of inter-religious activities in Romania after the 1989 Revolution, saying, "The Vice Ministry for Religious Affairs has been established since 160 years ago; its role was limited to supervision and control over religious denominations before the Revolution, while it has changed largely since the Revolution and Romania is committed to democracy."

Head of the Iranian Delegation, Dr Abbasi, then expressed his happiness in the successful organisation of four rounds of these dialogues in Iran and Romania and emphasised the important role played by religious leaders in resisting and reducing such social problems as extremisms and terrors. Allameh Tabataba'i University (ATU) and Al-Mustafa University then acknowledged their willingness in expanding their educational, research and religious collaborations with the Romanian universities.