We want to expand relations with Iran, Chinese Ambassador says 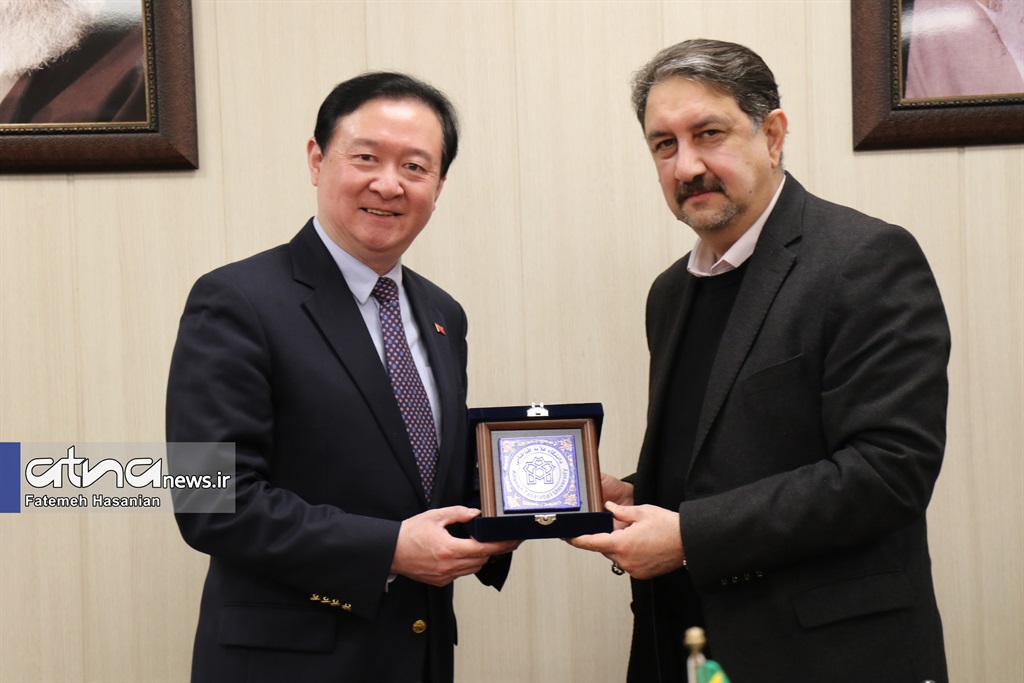 Invited by ATU President, the Chinese Ambassador to Tehran and a delegation of academics had a visit to ATU on 20 January 2020.

The Chinese ambassador to Tehran and a delegation accompanying him visited ATU on 20 January 2020 and talked on developing academic and cultural cooperation between ATU and Chinese universities.

As invited by ATU President, Professor Hossein Salimi, on 20 January 2020, Mr Chang Hua, the Chinese Ambassador to Tehran and a delegation of academics had a visit to ATU and negotiated on the potentials for academic and cultural cooperation between Iranian and Chinese universities.

During this visit, Salimi pointed to the outstanding position of ATU among Iranian universities, saying that "we are among the top 10 universities of Iran. Moreover, ATU is focused on Humanities and Social Sciences, and strives to be more pragmatic."

Salimi then continued to say that "there are currently 16000 students studying and 600 full-time and 1,000 part-time lecturers working in the university. ATU is a centre of excellence in several disciplines, including industrial management, information technology management, and oil and gas law, and is currently the only university to set up and operate a Chinese Studies Center in Iran.

President Salimi then talked about the establishment of research centre at Shanghai University of International Studies by ATU and said, "with the preliminary negotiations, there is a tremendous leap and growth ahead of the academic relations between Iranian and Chinese universities. As the Chinese government and universities have long cooperated with us in a variety of economic and political terms, we expect they are not affected in the current international sphere formed against Iran, and expand academic and cultural relations with us.

Salimi then hoped the universities of the two countries, given their tremendous potentials in theorising, work together to bring new ideas and theories to universities around the world and transform the Iranian-Chinese academic relations into a model in the new world.

He then continued, "we are pleased that Allameh Tabataba"i University is focused on Chinese Studies and Chinese Language, and we hope we can strengthen the university"s Centre for China Studies in the future by expanding relations."

Mr Hua then added, "we tend to see the world through our own eyes. Since 2016 and the visit of the Chinese President to Iran, strategic partnerships have been established between the two countries and we have a strong will to develop these partnerships and expand the political, military, and economic relations with Iran. We have also a culture of pragmatic collaboration. Although we are currently facing US pressures and sanctions, we believe these sanctions are a kind of hostage-taking.

Subsequently, Dr Seyed Jalal Dehghani Firoozabadi, ATU"s Vice-President for Research, pointed out that Iran and China are among the oldest human civilizations and maintained, "the two civilizations have always had peaceful relationships with each other and now they have the opportunity to strengthen these relations. That is why we have planned to mark a Spring day in our calendar as the Chinese Culture Day to contribute to the same mutual recognition."

Dr Shoja Ahmadvand, ATU"s Vice-President for Education and Associate Professor of Political Science then noted the many potentials for cooperation with China ever since the ancient China to the modern China and called for greater interactions with Chinese universities and removal of the existing barriers.

Dr Mandana Tishehyar, ATU"s Director of International Academic Cooperation, then pointed to recent announcement to set up a library in Iran by the Chinese State Council, and announced that ATU is well prepared to host this event. She then asked for the approval of the Chinese Embassy in Iran for furthering this positive undertaking, and hoped that the Embassy cooperates in this respect.

ATU President then said that ATU is one of the top Iranian universities in the field of Teaching Persian to Speakers of Other Languages, and it is prepared to organize summer schools for Chinese speakers interested in learning Persian language.

The Chinese ambassador, in the end, expressed his satisfaction with ATU"s decision to celebrate the "Chinese Culture," saying that Iran is "naturally a good partner for us and our relations are not limited to economic relations. Moreover, the [Chinese] authorities are working to remove barriers to further development and expansion of relations."