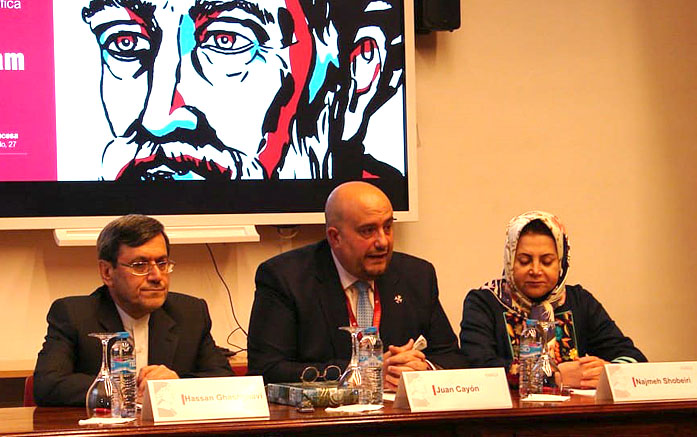 The International Conference on the Millennium of Omar Khayyam was held in the Khayyam Centre for Iranian Studies (Madrid) on 17 February 2020.

The International Conference on the Millennium of Omar Khayyam was convened in the Khayyam Centre for Iranian Studies on 17 February 2020.

In the beginning of the conference, Hassan Ghashghavi, the Iranian Ambassador to Spain, expanded on the unique character of Khayyam and the heritage he left for humanity in the fields of poetry, mathematics, astronomy, and chronology. Ghashghavi then appreciated the efforts made by the organisers of the conference, emphasizing the necessity to continue such meaures to make known the unique character of Omar Khayyam.

Afterwards, Juan Cayón, Rector of Nebrija University, then reviewed the numerous collaborations between Allameh Tabataba'i University and Nebrija University during recent years and talked about the pivotal role played by universities in providing a space for dialogues among various humans and cultures, saying that Nebrija University if pleases to host this important event.

Then Dr Najme Shobeiri, Faculty Member at ATU and scientific secretary of the conference, pointed to the important role played by the Khayyam Centre for Iranian Studies in desseminating Iranian language and culture, saying, "Since I was a student in Spain, I have always believed that all Iranian people, regardless of their positions, have to promote their litrature and culture." She then appreciated the efforts made by the steering committee of the conferene, adding that "As a celebration of the 1000th anniversary of Omar Khayyam, this conference is a result of the efforts made by Fatemeh Bayatfar and Mehdi Mohammadbeigi, members of the scientific team. From all the papers received, 52 were accepted and published in the proceedings." Shobeiri then hoped that these conferences could result in more sympathy among academics and scholars.

After the preliminary speeches, the participants presented their papers on the translations and reception of the Rubaiyyat in India, Russia, England, the Arab World, Japan and Tajikstan; Khayyam and Existentialism; Khayyam and happiness; etc.

The second day of the Conference was held on Tuesday, 18 February 2020 in University of Complutense, Madrid.

Your comments and questions about our news are highly welcome at ennews@atu.ac.ir. Your emails will be answered as soon as possible.
air.ir/ZHqbT9
Close

Free online workshop in how to get published

Dr Galyani wins the first prize at AM20